Egyptians in Rafah are taking the border wall seriously. As much as such the underground tunnels breathe life into an otherwise lifeless Gaza, Egyptian traders scrape a living transporting their goods to the other side of the border.

Rafah is waiting anxiously. Nobody knows what the coming developments will be after Israeli press ran the news about the steel wall.

Bedouins say the wall is almost finished and extends from Tel al-Sultan to al-Sarsouria.

Al-Masry Al-Youm visited Rafah following the Hamas demonstrations at the borders. Security patrols are stationed along the roads from Sheikh Zowayed to the Rafah crossing. The patrols managed to stop some cars carrying smuggled goods. As sunset creeps, security presence is further intensified on the coastal roads.

As evening falls, trucks transport goods regularly to the mouths of the tunnels on the Egyptian side of Rafah. The goods transported by those trucks provide two-thirds of the daily needs of 2 million Palestinians, according to officials from Hamas.

We then visited Abu Mohamed, one warehouse and tunnel owner, who lives not so far away from the Masura area in Rafah. The man, who refused to be photographed, said, "I can enter Gaza anytime in ten minutes, but I haven’t visited el-Arish for one and a half years."

When asked why, he said, "There are 3000 rulings passed in absentia in cases relating to tunnels and smuggling. A three-year prison sentence was passed against me in absentia."

Abu Mohamed also introduced us to two Palestinian traders who had come via the tunnels to conclude deals on calves and food.

Abu Saleh and Abul Abd are two traders from Jibaliyah. It took us a while to convince them to speak. Abu Saleh said that the tunnels represent Gaza’s right lung after Israel cut off the northern channels. He adds, "The area under blockade is currently witnessing the most intense movement of Egyptian goods. There’s increasing demand for fuel, winter clothing, home appliances, and cement. Israel used to sell one liter of gasoline for L.E10, but now the price of one liter in Gaza is not more than L.E3."Then Abul Abd adds, "In Gaza, One kilo of veal is now sold for L.E60, not a far cry from the price in Cairo."

Before it was dark, Abu Mohamed took us to the warehouse area. We saw heavy trucks driving along the Jifjafah and Jourah roads in the middle of Sinai, avoiding the Arish-Rafah road where they are more likely to be ambushed by security forces. Goods transported were mostly cement, gas oil or gasoline.

In the Mahdeya village, the traders had dug massive warehouses underground and lined them with nylon. Fifty-thousand-liter-Fuel tankers come from Suez and empty the gas oil into those underground warehouses. Smaller trucks then transport the fuel to the tunnels where it’s pumped into Gaza. Cement trucks work the same way.

Abu Mohamed, like other Bedouins, wants the tunnel trade to continue. "The people of Gaza are besieged and we have to help them as much as possible. At the same time, those tunnels improve our economic status because the government doesn’t offer the people of Rafah any development opportunities. It has also jeopardized our trade by closing the Rafah crossing, pushing the people to depend on the tunnels."

Addressing the government, he says, "We don’t harm Egypt’s security. All the confiscated goods sitting in front of Arish police stations are potato crisps, tires, and food. Open those crossings and we’ll stop the tunnel trade."

We asked him if the tunnels would be affected by the wall which will extend 22 meters below the ground. "The Palestinians are experts when it comes to metal walls. There are tunnels extending as deep as 35 meters," he adds, "But the traders on both sides are racing against time to transport the largest amount of goods before the wall is completed." That wall will leave Gaza high and dry, according to Abu Mohamed.

Speaking on profits, Abu Mohamed said that the Palestinians had organized everything such that everyone benefits. "The Tunnel owner used to get $40 per sack. But now most of the tunnels don’t work because there are fewer goods."

We tried to visit one of the tunnels, but, unfortunately, Abu Mohamed’s lookouts informed him through a phone call, that such a visit wasn’t possible because there were elements of Egyptian security in the area. So the cement transport plan was put off indefinitely.

The next day we returned to Arish to visit the commercial district, invited by some traders who are registered at the Chamber of Commerce. In 23 July Street, the spare part shops are almost empty. Essam Qoweider, who runs one such shop, said, "Arish is under siege. El-Salam Bridge has become another customs checkpoint."

Qoweidar complained about the stifling procedures undertaken by the police, allthough he has the receipts and entries attesting purchase and supply of those goods, which only go to his shop, as he says.

Abdallah Qandil, a Chambers of Commerce official, said that he had lodged a complaint with Gamal Mubarak about the suffering of the "legitimate" traders of North Sinai. "Law-abiding traders are supposed to move around the country freely, and not be dealt with as criminals," he added.

On the other hand, he adds, tunnel traders, are intensifying their activities before the completion of the wall. They are attracting young labor, below 15 years of age, to transport goods via the tunnels in return for large amounts of money, he adds, saying that such a practice had attracted labor away from Arish to the borders. 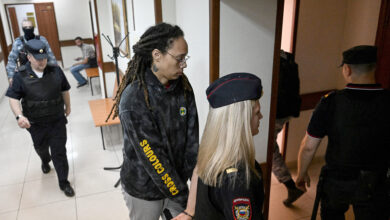 Brittney Griner will testify in Russian court as trial continues 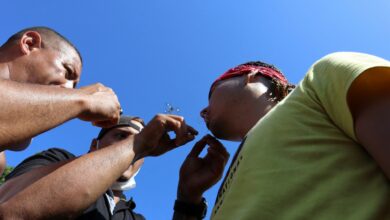 Migrants sew their mouths shut in quest for Mexico passage to U.S. border