Shelling occurred in the Russian-controlled city of Enerhodar near the Zaporizhzhia nuclear power plant on Sunday night, Russian and Ukrainian officials said — with each side blaming the other for the attacks.

Dmytro Orlov, the Ukrainian mayor of Enerhodar, said the shelling took place in the third and fifth micro districts of the city about 5.5 kilometers (3.4 miles) from the nuclear plant.

The shelling set cars on fire and a residential building “suffered a direct hit,” he said.

Vladimir Rogov, a member of the Russian-appointed council in occupied parts of Zaporizhzhia, blamed the attack on “Zelensky militants.”

The shelling comes just days before a team of international experts with the United Nations nuclear watchdog is expected to visit the plant to help ensure nuclear safety and security at the site.

“Russian terrorists shelled Enerhodar. They provoke and try to blackmail the world. They shell Nikopol, Marganets and imitate the ‘response’ at Enerhodar, although they are the ones firing,” Yermak wrote on Telegram. “Nuclear blackmail should not go unanswered.”

Some context: Kyiv and Moscow have made a barrage of accusations against each other about security and military action at and around the Zaporizhzhia power plant, the largest nuclear complex in Europe. But the lack of independent access to the plant, which has been occupied by Russian forces since March, makes it impossible to verify what is happening there.

Over the past month, a number of rockets and shells have landed on the territory of the plant, according to satellite imagery analyzed by CNN. CNN is unable to verify what strikes occurred, nor who was responsible. 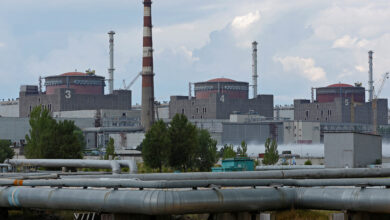