One hundred years ago the world was on the brink of the archaeological discovery of the century – the tomb of King Tutankhamun, whose life, reign and death remain of  great interest to many Egyptology enthusiasts.

Some beliefs indicate that Tutankhamun, whose tomb opened a window on the riches of ancient Egypt, was a weak and ill ruler based on evidence from the CT scans on his mummy.

Archaeologist Zahi Hawass, with scientist Sahar Selim, an Egyptian expert in studying archaeological rays and examining mummies, said that the tomography revealed a deformity in the left foot, such that Tutankhamun would have walked on his ankle or on the side of his foot. Hawass and Selim’s assessment contradicts the opinions of some archaeologists, as anatomist Douglas Dare had examined Tutankhamun’s feet in the 1920s and did not notice anything unusual, later backed by many of those who photographed Tut’s mummy in X-rays in the 1960s, including James Gamble, Orthopedic surgeon at Stanford University.

This demonstrated that if the king’s condition was severe as Hawass and Selim believed, he would likely have had asymmetry in the bones of the lower leg and perhaps even the pelvis, but the pharaoh’s legs appeared symmetrical, and there were no signs of asymmetric wear on dozens of pairs of shoes and sandals buried next to him.

Conversely, some proponents of the sick pharaoh theory refer to the presence of more than 130 walking sticks in Tut’s tomb, but this was common among ancient Egyptian officials who were often depicted with sticks as a sign of their power. 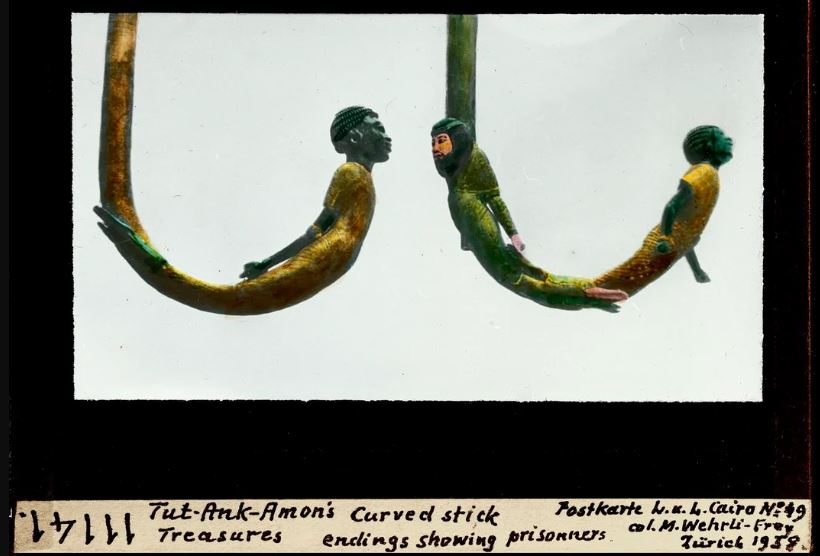 If Tutankhamun’s health was good, he would have played a role in his rule as a warrior. His first major building project at Thebes was the completion of the monument which his paternal grandfather, Amenhotep III, had begun. Amenhotep III built a 150-foot colonnaded hall in a temple Luxor but died before it was decorated.

Akhenaten, the son of Amenhotep, took over the reign he exiled the gods of Egypt and moved to Amarna, leaving the pillars and walls of Luxor bare for more than a decade.

When Tutankhamun succeeded Akhenaten, he returned to Thebes and was advised to complete the decoration of the hall to show that he is like his grandfather and not his father, eager to restore the old religion.

The boy-king decorated the Colonnade Hall with scenes of the most remarkable festival of Thebes, the Opet Festival, the ancient name of Karnak, the traditional home of the Theban triad of Amun (father), Mut (mother) and Khonsu (their son).

At that festival, the statues of the three gods were taken from their shrines at the Karnak Temple, placed in divine vessels and sent a mile and a half along the Nile to the Temple of Luxor, where they remained for a week of festivities, before they returned at the end of the festival.

Tutankhamun appears prominently in the reliefs on the western wall of the Hypostyle Hall, where he makes offerings to the Divine Trinity.

Scenes from the battlefield

During the New Kingdom of Egypt, every pharaoh built a funerary temple where priests made offerings for the soul of their deceased king. Temples were built on the west bank of the Nile, near the Valley of the Kings and are some of Egypt’s most famous monuments.

Pharaohs carved works of which they were proud. 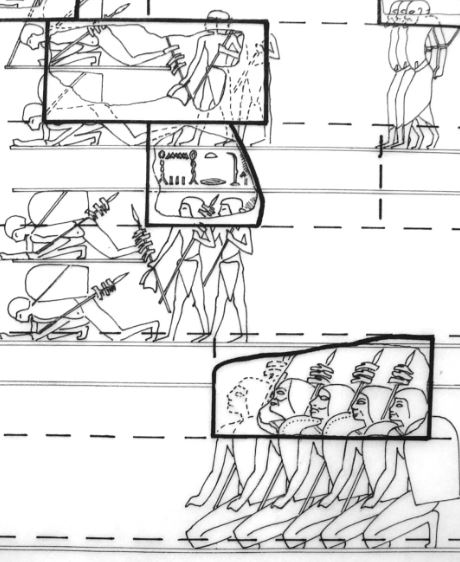 Funerary temples are important historical documents that provide information about the reigns of the pharaohs who built it, and is a primary source in visualizing the lives of the rulers of ancient Egypt.

Egyptologist Ray Johnson studied the scenes of the funerary temple of Tutankhamun, in his doctoral thesis.

He concluded that the blocks depicted two battle scenes, one in which Tutankhamun and a squad of chariots attack a Syrian fort and the other shows the young pharaoh defeating the Nubians. He also found that the era of the boy king witnessed a leap in development as he allowed a new artistic expression to flourish.

As a result, scenes of the boy king show a liveliness that distinguishes it from temple decoration before and after the late Eighteenth Dynasty, according to Johnson’s findings in 2009.

In the scene of the battle of Tutankhamun in Syria, soldiers appear with their hands clenched to their spears, while the image of the warrior boy king appears on the famous colored box in the antechamber of his tomb.

He is depicted as defeating his enemies, the Nubians and Asians, in scenes that also resonate in the funeral decorations of the temple. Tut ascended to the throne when he was nine years old and reigned for only ten years.

During the first four or five years of his reign, he may have never fought a battle, but there are battle scenes dating back to the ninth year of his reign.

As part of celebrations for the 100th anniversary of the discovery of King Tutankhamun’s tomb, the Tourism and Antiquities Ministry, represented by the Supreme Council of Antiquities, earlier this month launched the first virtual tour of the tomb recreated as it was first discovered in 1922, with all artifacts intact.

British archaeologist Howard Carter discovered King Tut’s tomb in 1922, when he dug through one of the doors and entered the tomb of the pharaoh, which has remained intact for about 3,200 years.

The tomb contained more than 5,000 artifacts, including a solid coffin, a gilded mask, and thrones.

It took Carter ten years to record all the items. But the only thing he couldn’t find was any record of how Tutankhamun died as there were no surviving records of the circumstances of King Tut’s death.

Scholars have now concluded that King Tutankhamun was not murdered, after a lengthy investigation that seemed to refute popular theory.