BELFAST, Feb 4 (Reuters) – Belfast’s High Court on Friday said import checks on food and agricultural goods from Britain to Northern Ireland under post-Brexit trade rules must remain in place, pending the result of a judicial review to be heard next month.

The court ruling means the checks will not be scrapped before the late February target that European Union and British officials have set to resolve negotiations on easing the trade restrictions to allay concerns in Northern Ireland.

The British region’s Agriculture Minister Edwin Poots on Wednesday demanded an immediate halt to checks on agricultural goods and food coming into the region from the rest of the United Kingdom.

The move, part of protest by his Democratic Unionist Party, which opposes the trade restrictions introduced under Britain’s European Union exit deal, was described by one EU commissioner as a breach of international law. read more

Poots’ order was not immediately implemented as his department said officials were “considering the wider implications of fulfilling the minister’s request.

“I propose to make an order suspending the order – or instruction – given by the minister for agriculture – until the further order of this court,” Justice Adrian Colton told the court on Friday.

Given the fact that the checks had been in place since the start of 2021 and that the order had been made at very short notice, the “appropriate course was to maintain the status quo” pending the full hearing, he said.

Colton provisionally named March 7 for a full hearing on the legality of Poots’ order.

A lawyer for Poots’ department told the court that its position was that the minister’s decision and instructions given to officials were “entirely lawful.” The department did not respond to a request for further comment.

Poots’ order was followed a day later by the resignation of Northern Ireland’s first minister, DUP member Paul Givan, in another protest against the post-Brexit trade rules.

Ahead of the court ruling, Irish Foreign Minister Simon Coveney described the two moves as unhelpful and “enormously frustrating.”

But he told Irish broadcaster RTE that the moves did “not change much” in terms of the ongoing negotiations between London and Brussels. 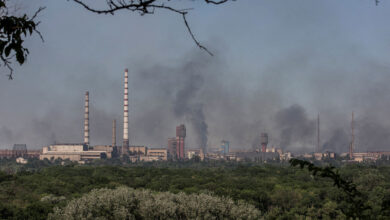 Ceasefire being negotiated for civilians at Azot plant in Severodonetsk, district leader says