St Mark’s Orthodox Church held mass on Saturday to mark 40 days since the Palm Sunday bombings which claimed the lives of 18 people in the Alexandria church on April 19.

In his speech on behalf of Pope Tawadros II, Bishop Thiodosis said the victims ascended to heaven on a feast day and they are in great joy in heaven.

The Mar Girguis Church in Tanta also held mass on Saturday to commemorate the 29 people who were killed in April and the 70 others who were injured.

Rimon Youssef Garhy, a victim of the Tanta bombing, passed away a few days ago in a hospital in Germany

The church announced that funeral prayers would be held for Garhy on Sunday once the body arrived in Egypt.

The victims’ families and several spiritual leaders from the Martyr Abanob Church, which is being renovated after the blast, took part in the mass, headed by Bishop Boula.

Meteorologists warn against slight rise in temperatures across Egypt

Experts reveal shocking scenarios for the sinking of Alexandria 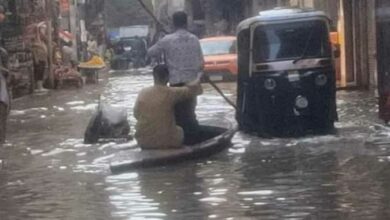 People resort to boats in Alexandria streets because of heavy rainfall