Eyewitnesses confirmed the construction of a stone barrier along the coast of Rafah some 2 km from Egypt’s border with the Palestinian Gaza Strip. Despite official denials that any such building was taking place, Al-Masry Al-Youm photographed a number of bulldozers laying massive stone blocks along the shoreline.

Some observers, however, say the new construction could merely represent the foundations of a new pier to be built in the area for the Egyptian coast guard.

In a related development, a delegation of EU parliamentarians traversed the Rafah border crossing Saturday on their way back to Egypt after a one-day visit to the Gaza Strip where they inspected damage caused by recent Israeli assaults on the Hamas-run coastal enclave.

"I came here to show that Ireland sympathizes with the Palestinians and to prove that politicians can do something besides just talk," said Irish MP Nessa Childers.

Meanwhile, a security source stressed that the crossing would remain open to international delegations coming to support the Gaza Strip’s roughly 1.5 million besieged inhabitants, provided that these delegations coordinate their movements with the appropriate Egyptian authorities.

Egypt made unremitting efforts to contain situation in Gaza: Sisi 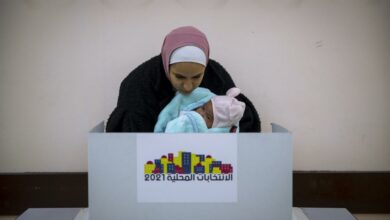