In an editorial on the front page of Al-Akhbar newspaper, one of Egypt's most widely read, Mohamed Hassan Al-Banna said he was ready to resign after receiving a call from the Muslim Brotherhood criticising his paper's coverage. He urged Morsy to break away from the movement that launched him to power.

The criticism adds to pressure on Morsy ahead of opposition rallies this weekend demanding that he leave power. Banna said the Brotherhood had "proved to me its failure in running the country," though he said Morsy remained a legitimate president.

Such dissent would have been unthinkable under Egypt's deposed president Hosni Mubarak, when the main state newspapers were slavishly loyal to the establishment.

"Some of them imagine that Al-Akhbar won't publish truths the way other papers do it… I reject any pressure from anyone, particularly members of the Muslim Brotherhood," Banna wrote.

The editors of Egypt's state-run papers are appointed by the upper house of parliament – an Islamist-dominated chamber. Banna was appointed last August, two months after Morsy took office.

A leading member of the Freedom and Justice Party, the Brotherhood's political arm, denied Banna's accusations.

"We haven't interfered in any way with what editors write and we don't exert any pressure on them," said Fathi Shihab Al-Deen, chair of the committee which vets the editors.

It was the second sign of dissidence at Al-Akhbar this month. The paper recently appeared to ridicule the cash-strapped government's reliance on Qatari aid, publishing its first edition with the headline "Mama Qatar supplies Egypt with gas". The word "Mama" was dropped in the second edition.

Banna's comments came after journalists at another state newspaper, al-Ahram, complained of the "Brotherhoodisation" of their institution and made an appeal on Facebook for an alliance with the anti-Morsy campaign "Tamarod-Rebel!"

Banna lamented the lack of industry, investment, and job opportunities for young people in Egypt.

"Dr. Morsy, you are the legitimate president of this country and it would be better if you stayed. But in order for you to stay you need to purge the country of your entourage of hypocrites and cheats," he said. 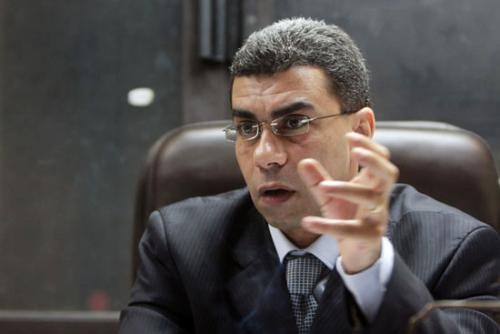