Under the slogan “Tax the Rich, save the Climate”, about 300 demonstrators belonging to the “Swiss Socialist Youth” and the “Strike WEF” coalition demonstrated in Davos to demand applying a climate tax on the wealthy who attend the annual meeting of the World Economic Forum.

They were joined by activists from Greenpeace.

Two days later, the forum began, in the presence of dozens of senior officials, millionaires, and hundreds of other interested parties.

The forum is designed to tackle issues related to finding solutions to  world crisis.

From the beginning of the inaugural meeting of the forum, world problems that have struck the past few years surfaced and were addressed by the speakers.

There was more concerning talk that even took place on the sidelines of the event between officials. So it seems that people are divided on their opinions about this issue.

In the past, these meetings were usually centered on either promoting cooperation or solving pending bilateral problems.

It seems that this time around obsession has dominated all those present here in an economic forum of that size, Davos forum.

Here in the Alps, the forum is being held in a “geo-political and geo-economic situation that is the most complex in decades”.

The forum’s chairman, Borg Brende, commented on the situation saying the pandemic, trade disputes between the US and China, and the war in Ukraine contributed to increasing complications, which prompted many of the world leaders look for a real way out.

While Klaus Schwab, President of the Forum, said in his inaugural speech to the Forum that one of the greatest challenges currently facing humanity is the state of deep societal fragmentation that is tearing nations and peoples apart, warning the world that with the beginning of this year is facing multiple and unprecedented challenges.

Here in Davos 2023, the largest representation of the continents of Africa and Asia, at the expense of the US and Europe, in addition to a relatively large Arab presence, began discussions about energy prices, which have become the largest crisis in Europe.

Ursula von der Leyen, President of the European Commission, said, during her speech at the opening of the forum.

Europe has taken active steps to reduce energy prices and reduce its dependence on Russian energy imports, adding that Europe is strengthening its steps towards investing more in clean energy, by promoting the production of new clean technology.

In Davos, Switzerland, everyone seems to be facing the military crisis between Russia and Ukraine, everyone seems to be seeking solutions to the successive shocks in the food and fuel markets, everyone will be facing high interest rates and its impact on the economies of emerging countries, and how they led to an increase in poverty rates around the world, leading as a result to increased debt levels.

One of the main topics for discussion is also the climate issue, as the organizers seek to help the discussions pave the way for the next global negotiations within the framework of the 28th session of the Conference of the Parties (COP 28)  scheduled to be held at the end of the year in the sisterly UAE.

The forum also raises important questions about the possibility of building a new system for investment, trade and infrastructure.

The issue of returning to the pre-coronavirus world system has become one of the aspirations that the gathered world leaders are looking for, but I believe this is very difficult to happen, in light of the clear lack of cooperation from everyone, to the extent that an issue like the climate change, which is fundamentally a “participatory” issue, a fundamentally participatory issue, is heading towards an isolationist battle, which gives the impression that economic issues will be completely difficult to discuss in light of a state of clear partisanship in the world.

In Davos this year, there is a clear change in the attendance map, as billionaires from Russia are absent due to the US-European blockade imposed on them, and there will also be a clear absence of Chinese billionaires who were always keen to attend, as Beijing is still under the weight of the high incidence of COVID-19, as well as the market staggering stocks that wiped out US$224 billion from the fortunes of Chinese billionaires in 2022.

Although we expected this absence to be compensated by billionaires from Europe, the list of attendees from the old continent included only 18 European billionaires, and certainly billionaires from the US formed the largest part with about 33 billionaires, in addition to the strong presence of the giants of Wall Street led by Jamie Dimon of JPMorgan, Larry Fink of BlackRock, and Stephen A. Schwarzman of Blackstone Group.

Perhaps the void left by the billionaires of Russia and China will be filled by the presence of businessmen from the Gulf countries, which witnessed an adverse recovery for most of the world’s economies, thanks to the rise in oil prices due to the impact of the Russian energy crisis.

The conference is also witnessing the attendance of 13 billionaires from India, including Gautam Adani, the coal tycoon, whose wealth grew by $44 billion last year, and he is the fourth richest person in the world.

It seemed clear that the guest list of billionaires this year is strikingly different from the lists of previous years, reflecting the global turmoil that reshaped fortunes and changed the centers of power amid conflicts, the pandemic and high inflation.

Many here in the corridors of Davos talk about the hope for cooperation raised by the forum with the slogan “Cooperation in a Divided World”.

Some participants believe that the greatest contribution that Davos can make will be the push towards reforming the global tax system to reduce social disparity, in addition to seeking to reflect the development of the global economy for emerging markets, which are often the losing party as a result of economic developments.

Everyone hopes that the stronger parties will put aside controversial issues in order to support the weaker parties, and that cooperation will be the basis for attempts to get out of the crisis.

The first day of the forum has passed, and everyone is in a state of anticipation of what will result in the coming days. Perhaps there is hope for more serious and effective discussions if intentions are sincere. 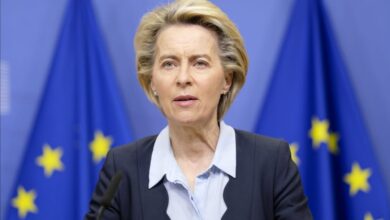 European Commission president arrives in Kyiv ahead of Ukraine summit

Expecting the Unexpected: 2023 and Beyond

‘The sad call’ from Davos to save the world 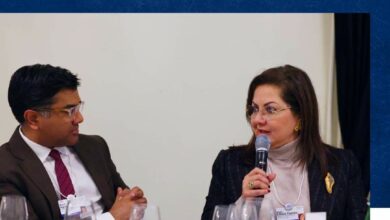