Tradition tells the story of a poor man who went to the Sultan’s palace and asked the guards outside to inform the Sultan that he wished to tell him about a serious issue. The poor man returned to his home but waited in vain. The next day, the man repeated his request. This time he told the guards: “If the Sultan is too proud to visit me, let him delegate any of his ministers”. Yet nobody came. On the third day, the poor man returned to the palace, and this time told the guards to inform the Sultan that he would lose control over his kingdom and could wake up the next morning to find that his crown had disappeared.

The frightening news prompted the Sultan to get up immediately. Accompanied by his minister and guards, he went to visit the poor man at his home. Knocking on the door, they could hear the man’s voice from inside, asking who was there. “Open the door, this is the Sultan!” cried the Sultan. The poor man replied: “Go back and come later”. The Sultan was astounded: “How dare you! You refuse to open your home to the Sultan?” The poor man replied: “I am now with He who is stronger and higher than the Sultan”. The Sultan could do nothing but return back to his palace.

When the Sultan returned and knocked on the door again, the poor man told him: “Tell your minister and guards to retreat”. The Sultan did so. Then, opening the door of the poor man’s house, the Sultan found nothing but a ramshackle shelter and small children suffering from hunger. With emotion he asked the poor man: “How will I lose my crown and power?” The poor man replied: “Are you afraid only of losing your crown, but not afraid that Allah might punish you for leaving my children to die of hunger? By Allah, if you do not lose your power on earth, you will lose it in heaven. As for me and my children, we have submitted our complaint to the Almighty, who will respond to his slaves”.

The Sultan, crying and trembling in fear of Allah’s revenge, asked the poor man why he had not requested the treasury for charity. The poor man replied: “We chose you as a king so that you will come by yourself and bring us charity, so how can you leave us to beg your cortege?”

I remembered this story while watching the events of the NDP conference. All the ministers and other important figures gave their speeches. Whether we agree or not with the content of their eloquent addresses, what was noticeable was a common tone adopted by all the NDP representatives, reminding the people of the ‘favors’ carried out for them by the party, saying: “We did so and so…”, “We made several achievements that the people ungratefully deny”, “The media focuses on the empty half of the glass”, or “The government support the poor and the destitute”. In the middle of this avalanche of slogans, no one asked himself if this was reality. No one wondered about the increasing number of impoverished citizens as published in UN reports and admitted by the government itself, or the reason behind the deteriorating level of education and healthcare, the ever-growing slums and illegal housing, rising unemployment rates, increasing inflation, increasing spinsterhood, or young people drowning at sea trying to illegally emigrate from Egypt.

I believe such questions upset the party and the government: they are truly embarrassing. So, let us ask two different questions.

Firstly, did any minister or member of the NDP notice something new about the president’s Saturday speech? It was not followed by the usual poems lauding the president, but rather by complaints and grievances demanding personal interference by Mubarak. Some were problems that do not need a president to solve them but simply the intervention of a local council. Yet nobody wondered whether this indicates anything other than the government’s failure to face the real sufferings of the people.

So – the second question – why would we resort to the president, unless we lose all hope in the government?

Unfortunately, our government does not realize that other governments of the world make it their top duty to provide services and care, to treat all people equally – even those in poor areas – and not to put citizens in a position where they must seek mediation or use connections to enforce their natural rights to medical care and education. Our government is ignorant of the people’s resentment towards it, because it treats them as beggars and not as humans with accompanying rights. Our government does not see itself as a servant of the people, therefore it does not accept that its duty is to deliver clean water, food and job opportunities to people in the farthest provinces of Upper Egypt before those who reside in luxurious districts.

The NDP government has scored some points on the economic level, achieving obvious growth rates. Yet the fact that the benefits of that growth are not reaching Egypt’s citizens is troubling. The government has not learned that the citizen must see this growth reflected in his pocket and in his kitchen, and that Egyptians prefer a life of suffering than to beg for their rights.

Now do you understand why the poor man asked the Sultan to visit him at his home? 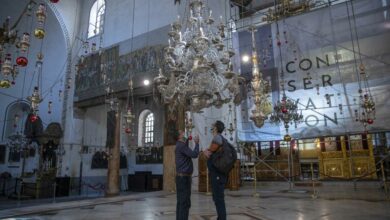